This project ran from September 2009 till June 2012, and was co-funded by the EU under the ERDF programme and by the Maltese Government. 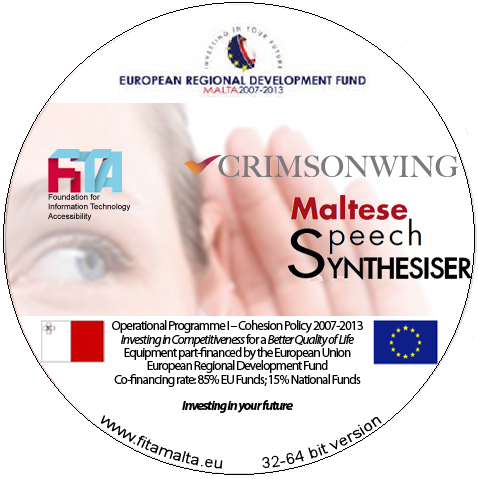 More information about this project can be found on the FITA website. The Maltese text-to-speech engine is available for download from the following link.

My role in this project

I had the privilege of working on this project as part of Crimsonwing’s R&D team. Crimsonwing was awarded the contract by FITA (the Foundation for Technology Accessibility) for the development of this project. Apart from developing the speech synthesis engine, Crimsonwing also developed the iSpeakMaltese apps, which are available freely for download from the GooglePlay store (follow this link). 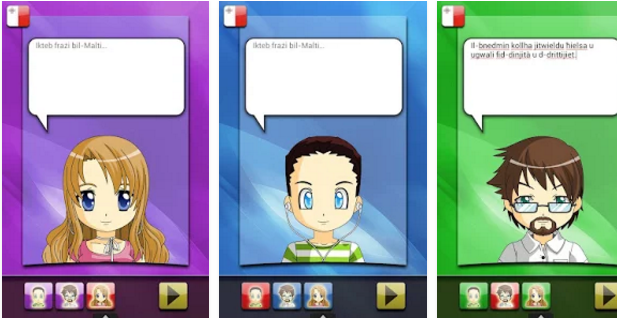 This project contained a heavy element of research, apart from the requirement of developing a fully-fledged functioning and real-time product. Novel aspects of this research were accepted for presentation at an academic conference and for publication in a peer-reviewed academic journal – these are listed on my publications page.

I also contributed to the development of the rule engine for performing grapheme-to-phoneme translation, i.e., converting written Maltese text to its sound representation (specified as a sequence of diphones). This is also referred to as G2P for short, or as letter-to-sound conversion.

Unlike languages like English, G2P in Maltese is quite straightforward and can be done via a sequence of context-sensitive re-write rules.

Thus there is no need for complex machine learning algorithms for G2P. But then the Maltese language exhibits complexity in other areas such as linguistic morphology and verb formation, when compared to languages like English. The context-sensitive re-write rules used for performing G2P in Maltese can be found here.

My other main contribution to this project was in the audio post-processing stage. After speech is synthesised from a sequence of recordings of diphones, selected via the Viterbi algorithm, the concatenated sound has sound artefacts at the join positions (clicks) – these need to be eliminated in a post-processing stage. Since the speech synthesis engine is SAPI compliant, it needed to support features like varying the playback rate and sound volume adjustment.

Varying the playback rate can not be implemented as a simple compression of the audio signal, else the frequency of the sound changes as well (causing the voice to sound like that of Mickey mouse). Thus a special algorithm has to be used that varies the temporal duration while keeping the sound frequency fixed. I implemented this via the use of the WSOLA algorithm (Waveform Similarity based Overlap-Add).

Below is some information about the text statistical analysis that was performed as part of the work for the development of the Maltese Speech Synthesis Engine.

The text corpus used was scraped from the Internet using web crawling tools and converted to Unicode text. 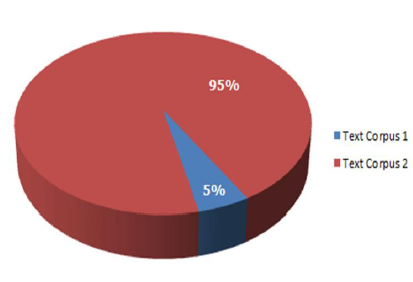 Here is a brief description of the data cleaning tasks performed on the raw text in order to standardise it and simplify the language morphology: 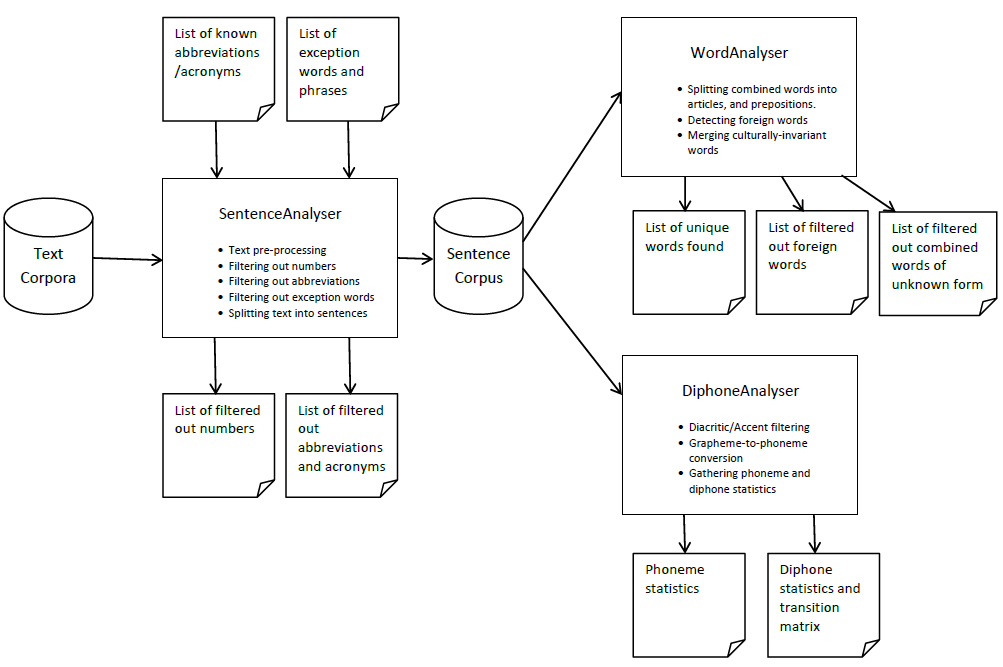 After performing G2P conversion, the corpus contained a total of \(114,774,451\) phonemes. Statistical frequency analysis was performed on this phoneme corpus: 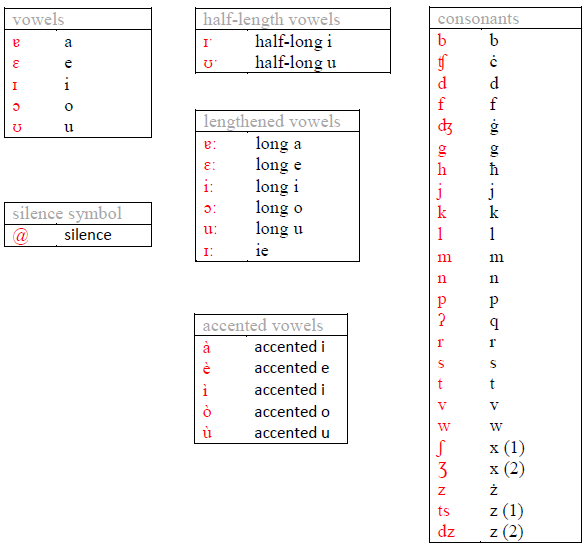 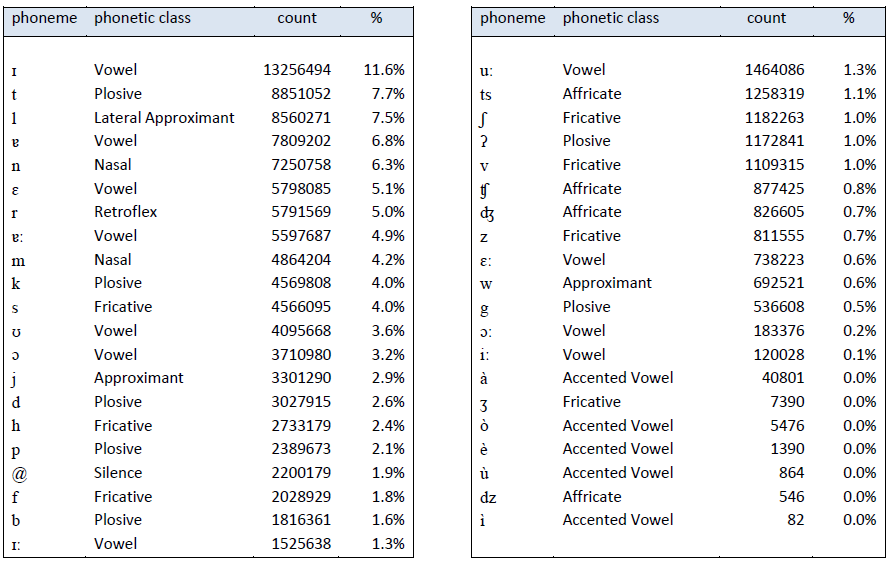 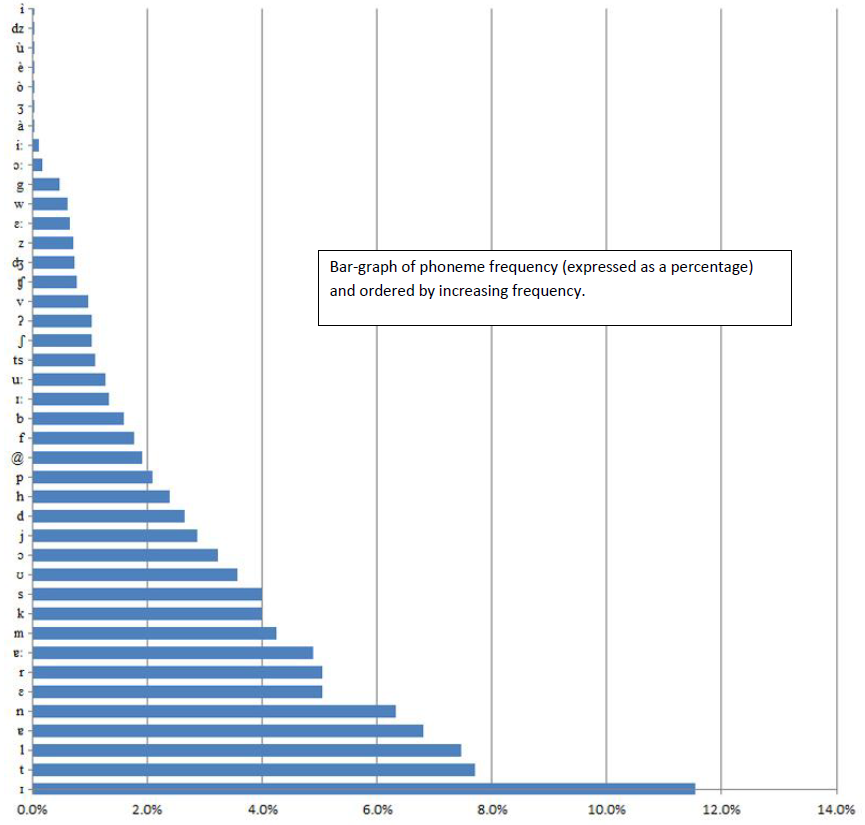 The corpus was also statistically analysed for the frequency of diphones (two consecutive phonemes). In total, there are \(113,860,068\) total diphones in the corpus.

The following are some statistical results on diphones: 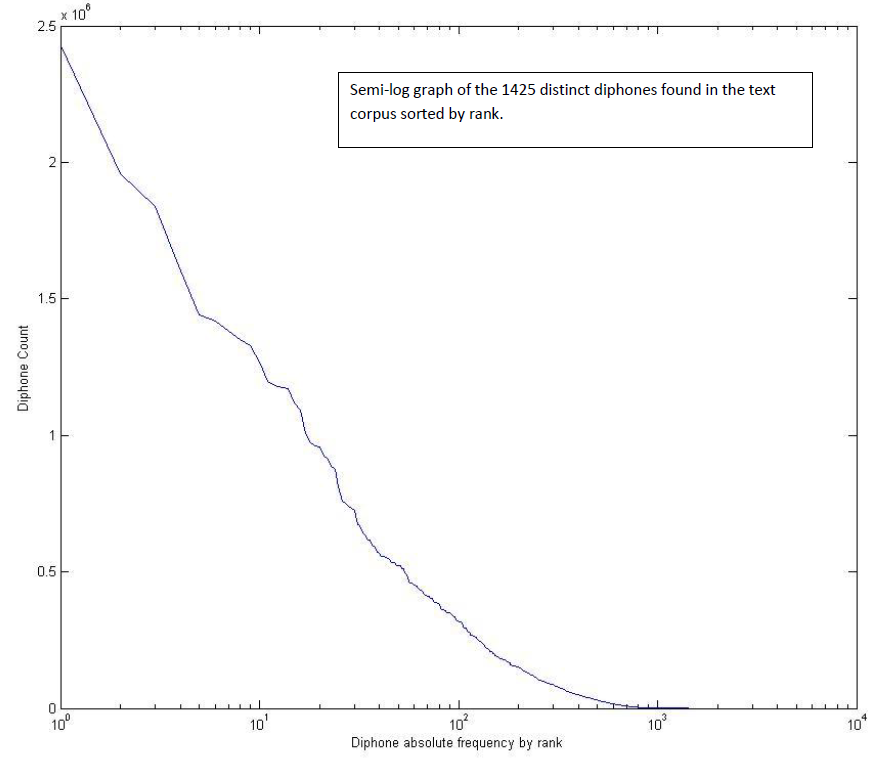 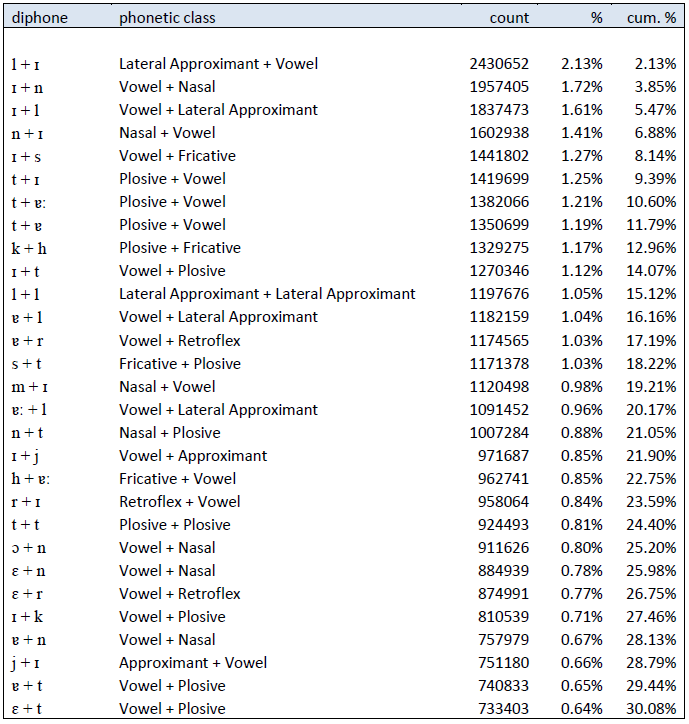 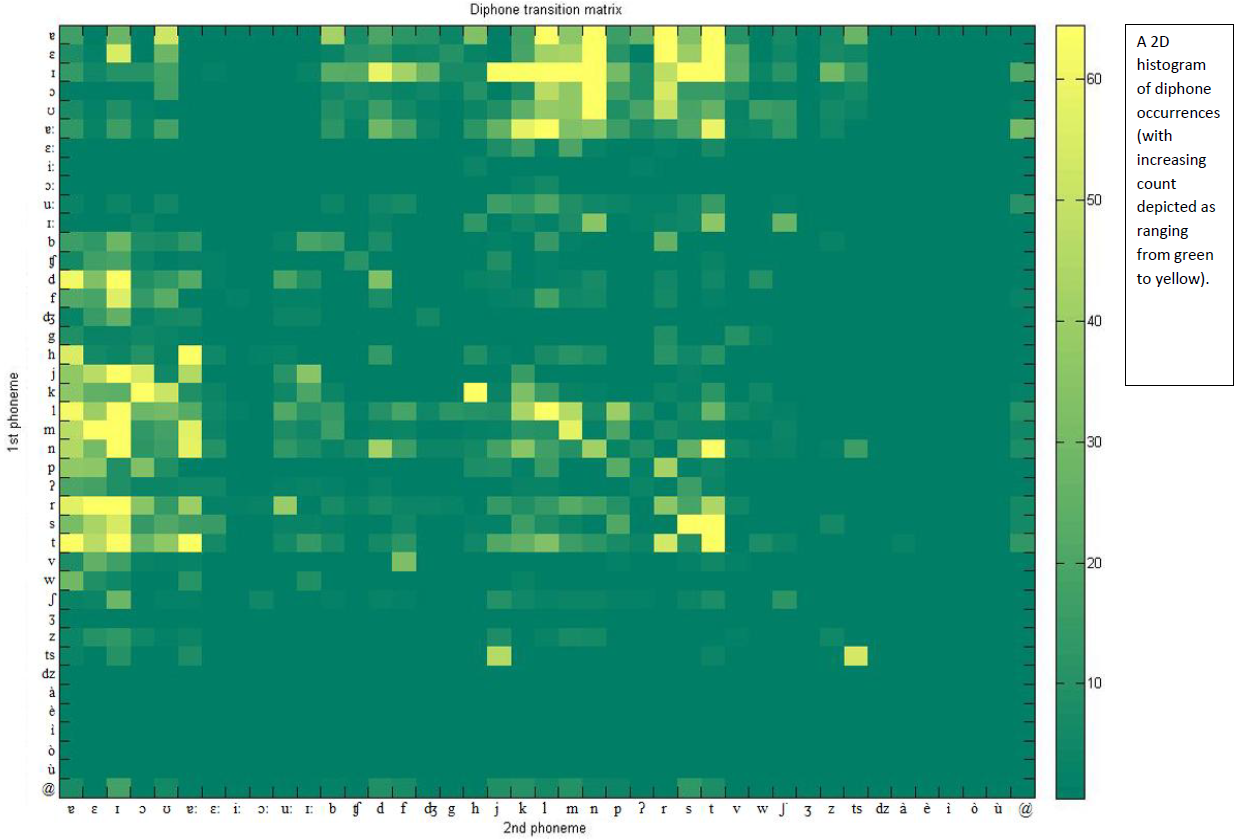 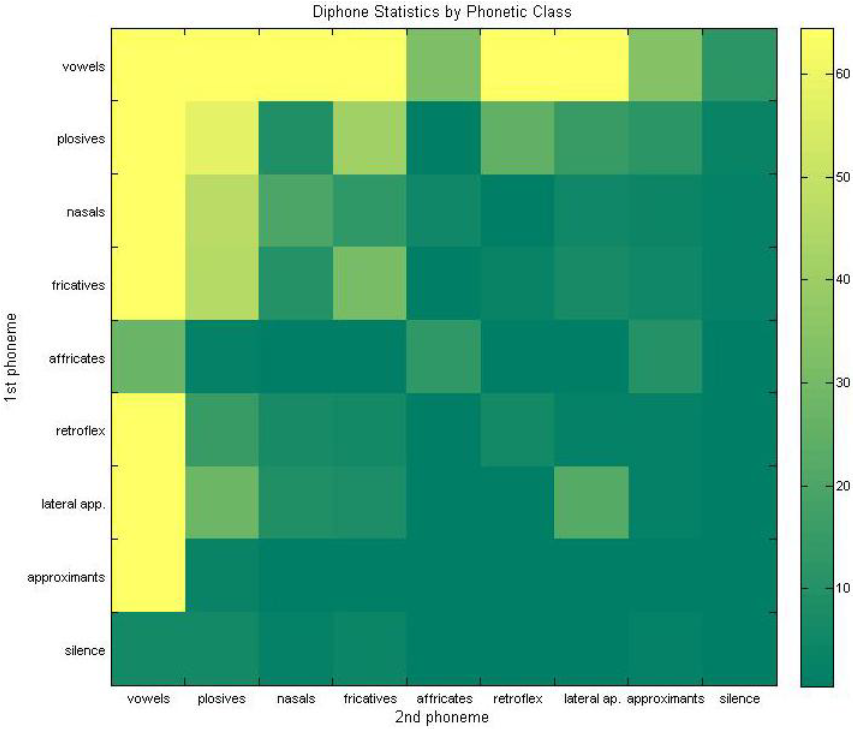 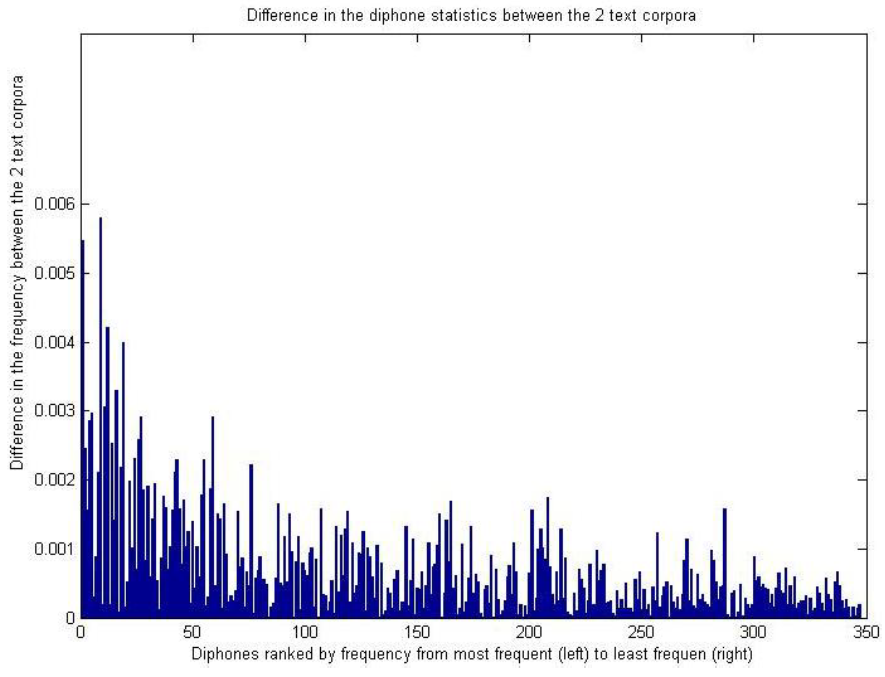 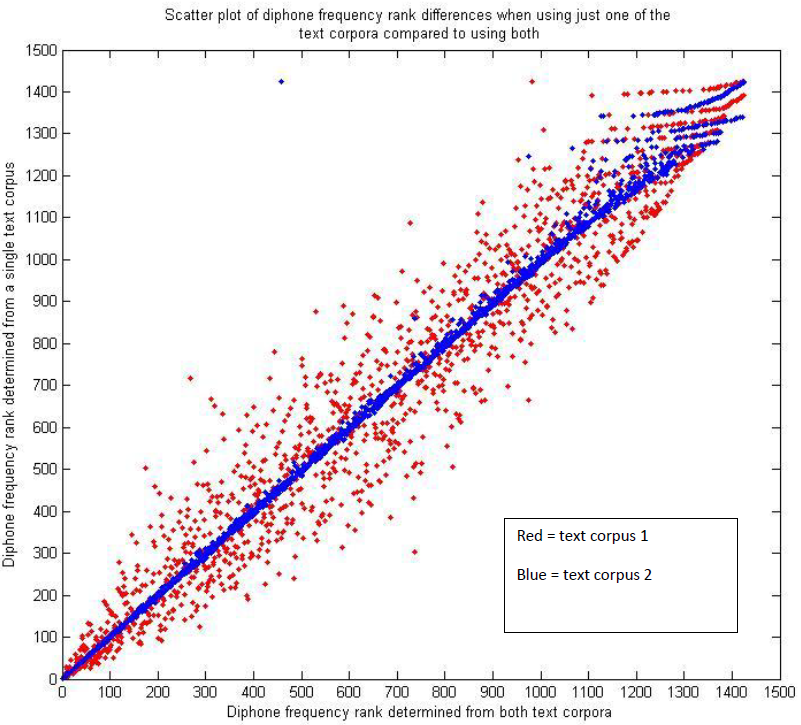 More detail on the general architecture of the speech synthesis engine can be found in this paper.

Many thousands of diphones (over 100,000) had to be manually selected from the voice actor recordings and cut out and refined for use. This was a laborious & tedious process. Thus the use of tools to support & facilitate this manual process was quite important. Some screenshots of these tools are shown below: 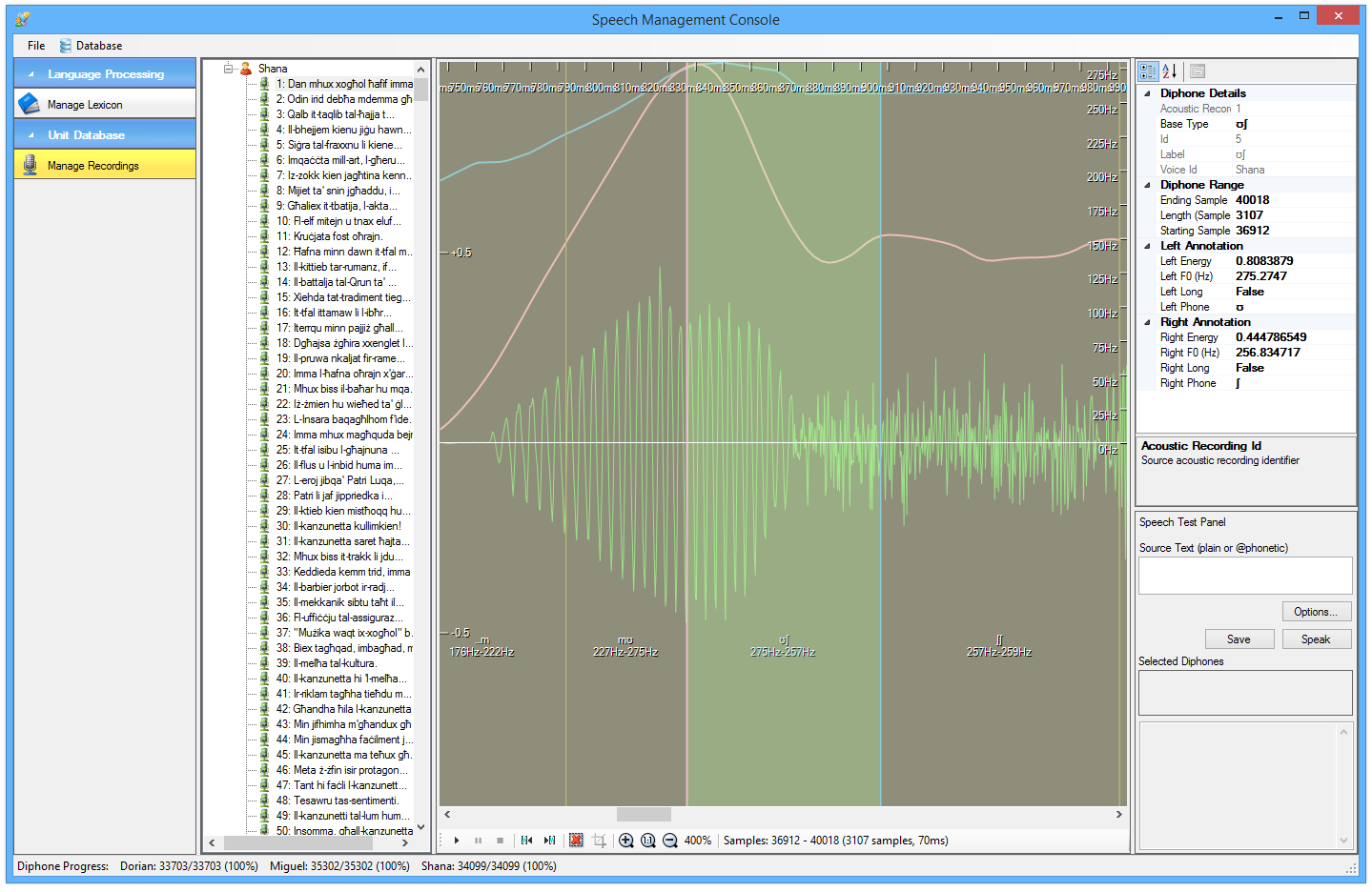